Labrador lovers say that happiness starts with a wet nose, and a wet nose comes in various colors.

Your Labrador’s nose can come in various colors such as black, dark black and brown.

Then what about a pink nose? Where did the pink nose Labrador come from? Is a Labrador with pink nose called a Dudley Lab?

This article explains everything about the special Dudley Labrador retriever. Have a look.

Dudley Lab- What is a Dudley Lab actually?

Have you seen them?

So Dudley Labrador is a normal Labrador which does not have any pigmentation on the nose, eyes, eye rims and even feet. They look pink since the day of birth throughout the entire life.

This is a unique genetic trait and this cannot be considered as an abnormality.

Why do Dudley Labrador puppies have pink noses? It is all connected to its genetics.

When you look at a newborn Labrador puppy, you can see its pink bright nose. Usually, this colour becomes darker within one or two weeks. Some noses start turning black, some into brown and some remain pink in colour.

A Dudley Labrador is a result of genes that the puppy has acquired from its parents. This Dudley Lab retains its pink color nose even though it grows older and older. This is purely related to genetics.

Yes, Dudley Labs are a rare genetic variation and only a few percentages of yellow Labradors tend to carry this genetic trait. Even though Dudley Labradors are rare, they cannot be treated as genetically defective. They are just another version of colour variation.

But some people argue that Dudley Labs are very common. This is because they confuse their Lab for a Dudley Labrador because of the colour depigmentation that occurs generally with age and seasons.

Many Labradors lose their pigmentation on the nose usually as the dog grows by age. This is very common. At the age of 4, my dog started losing its pigmentation and i have observed my Labrador’s nose turning pink.

The pigment melanin in your dog’s nose is produced by an enzyme called Tyrosinase which becomes ineffective slowly as your Labrador grows by age and you find its nose losing pigmentation.

The depigmentation increases during the winter as this tyrosine is more effective in warmer weather. Hence this condition is known as Winter Nose or Snow Nose. 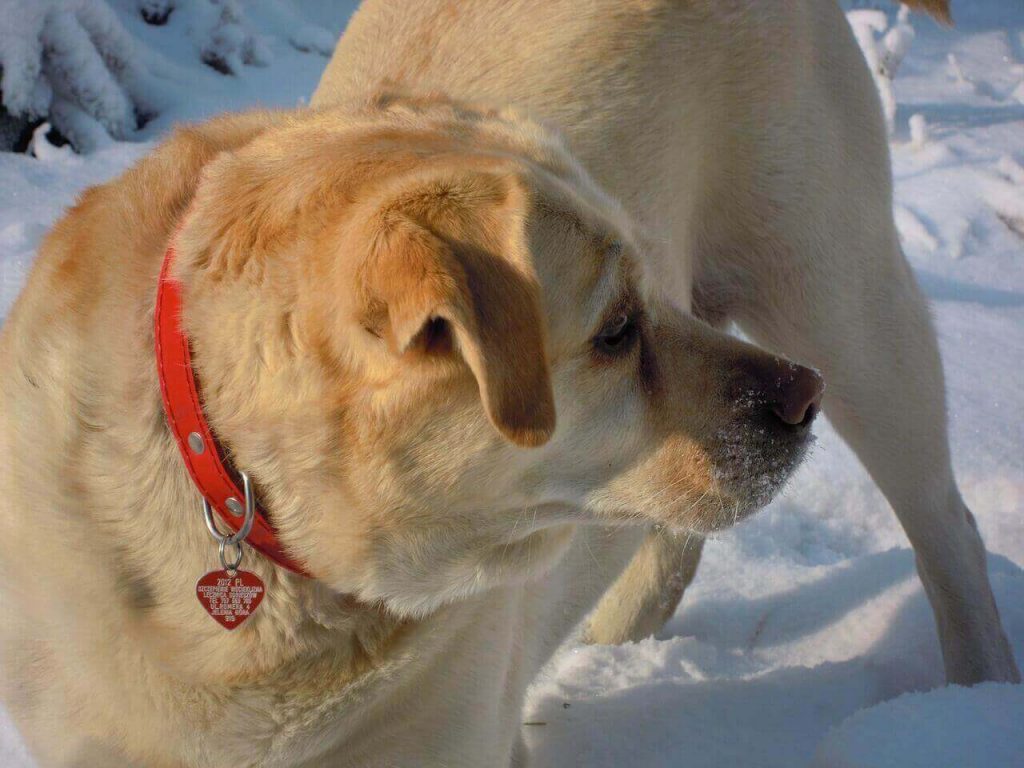 Do not confuse the Labrador with a pink nose with a Dudley Labrador. Not every pink nose Labrador is a Dudley dog.

As normal Labradors with snow nose retain their black colour around eye rims even though they lose their nose colour. But this is not the case with Dudley Labs as they do not have pigmentation on the eye rims too.

A Dudley Lab has the same characteristics as that of a normal dark nose Labrador. Either black nose or brown nose or a Dudley nose, every Labrador can be a loving and wonderful family pet.

The only difference is the physical characteristics related to the colour of its nose, eye rims and feet. Dudley Labs have no pigmentation in some areas where yellow Labs have black colour.

Other than this you won’t find any characteristic differences between Dudley Labradors and normal dark nose Labradors.

A Dudley Labrador will have the same health issues as a normal Labrador, such as hip dysplasia, progressive retinal atrophy, bloat, cancer etc.

In such cases, you should be careful in keeping your Dudley Labrador out of the sun.

If your dog prefers to enjoy the long sunny days, remember to apply sunscreen to its nose to avoid severe sunburns.

Remember that you should not use a sunscreen intended for human use as it may contain ingredients toxic for your dog. There are many safe non-toxic sunscreens available in the market for your dog.

After my research, i found out some best ones. You can either use this or this. Or else you can also consult your Vet to choose the sunscreen protection to protect its nose.

Or if your dog does not like the sunscreens, you should at least buy a doggy sun hat like this to protect him

Are Dudley Labs bad?- Should i buy a Dudley Labrador puppy?

Some people think twice before buying a Dudley Labrador puppy due to certain factors which are untrue regarding Dudley Labrador temperament and its behaviour. As i told you a Dudley is the same as a dark nosed one.

But some breeders sell Dudley Lab puppies at lower prices as they consider it as an unwanted genetical trait. It all depends upon the nature of the breeder.

Before bringing home a Dudley Lab it is better to know two facts regarding Dudley Labs.

1. Their noses are at higher risk of sunburn in hotter climates. You should take essential care to prevent such sunburns. This is important to remember.

2. If you want your Labrador to be a champ in shows, it is better to avoid Dudley Labs. The Show ring penalizes Labradors with pale noses, pale eye rims and feet.

So, unless you want your Labrador to participate in shows there is no reason for rejecting a Dudley Labrador. If you are looking for a beloved family pet, a Dudley Labrador can be a wonderful pet and a lovable family member like any other Labrador retriever.

Take the utmost care of your Dudley Lab by training him well. Watch this amazing video for a one-stop solution for your dog’s behaviour problems.